I would like to illustrate accuracy through stories of two renowned archers from history, or legend, depending on whom you ask.

For those among you who are not familiar with the story of Wilhelm Tell, a great Swiss hero, I will give you the short version. Anyone who wishes to do so, can read the full story in the book by H.E.Marshall, Stories of William Tell told to children, which you may find at The Baldwin Project website.

It was in the Middle Ages, when Austrian Dukes have ruled over Switzerland by tyranny and hardship. As a result, a movement called Rütli was created in November 1307. It was named after the mountain where its three founders pledged to take Switzerland back from the Austrians, and set their people free.

The Swiss people consider this to be the foundation of the Old Swiss Confederacy and they take great pride in their heroes. 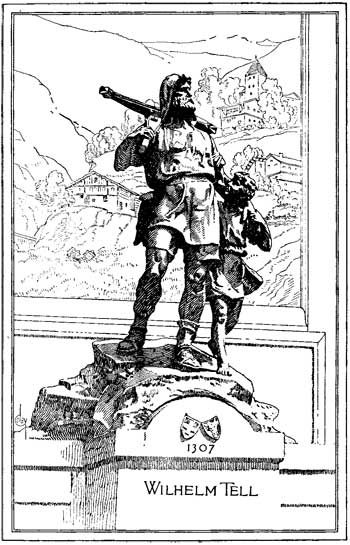 In Altdorf, the capital of Uri canton, the Austrian Vogt (overlord), Albrecht Gessler, has devised a new way of oppressing and humiliating the people. He has erected a pole in the town market square, and placed his hat upon it. All passersby were required to bow before the hat as if the king was seated there. He has appointed a guard to stand by the pole and enforce the new law.

Wilhelm Tell was a local hunter, mountain climber, dealing in many trades. He was known for his strength and his great proficiency with the crossbow. He was also part of the Rütli movement. A short time after the pole was erected, Wilhelm passed in the market square. With him was his young son Walter of about six years. They did not bow before the hat on the pole. This was swiftly reported to Gessler, who ordered to bring Tell and his son to him to make an example of them for all to see.

“I have heard of your skill with the crossbow”, said Gessler to Wilhelm Tell. “You can prove it. If you shoot the target of my choice with a single arrow, you shall save both yourself and your son from the death sentence”.

Wilhelm agreed. Gessler ordered to seize Walter and tie him to a tree. He placed an apple on top of the boy’s head.

“If you hit the apple with a single arrow from a hundred yards distance – you shall not be executed”, said Gessler.

Wilhelm begged him not to make him shoot that apple, for he was afraid to hit his son and kill him. “I would rather die!” he cried.

But Gessler insisted that if he does not shoot – they would both be put to death.

Wilhelm picked up his crossbow and took two arrows from the quiver. One arrow he placed in the crossbow, and the other he put in his jerkin. He prayed for his arrow to be true and not hit his son – and shot. The arrow split the apple into perfect halves, and Walter stood there, unharmed.

“Magnificent shot!” praised Gessler. “Tell me, why did you take out two arrows?”

“It’s a tradition with us, hunters”, replied Tell. But Gessler did not believe him and pressed on.

“In that case”, said Tell, “if I keep my life, I shall tell you the truth. Had I killed my son, I would have shot the second arrow through your heart, and I wouldn’t have missed”.

Gessler was furious, but he has promised that Tell would keep his life. So he ordered to send him to the dungeons in a far castle, to never see the light of day again. On the way, the boat, in which Tell was transported, got in a storm. The guards cut Tell loose, so his seamanship skill and strength could get them safely to shore. However, as they got close to a cliff, Tell has picked up his crossbow and jumped of the boat onto the cliff. He made his way back to Altdorf and killed Gessler. A short time afterwards, the Rütli men led the country in an uprising against the Austrians, and freed Switzerland.

So the legend goes. But why am I telling you the legend?

And why am I telling you this story?

Well, I would like to talk of accuracy, focusing on the story from the archer’s point of view, from Wilhelm Tell’s perspective.

No doubt, most of you have imagined more than once the famous shot into the apple on the top of the boy’s head. What would have happened if he missed? What if he shot the boy? The mere thought is horrifying.

But let us disengage from our emotions and focus on the shot itself, and the parameters making up the archer’s accuracy.

It is absolutely clear, that in order to be able to make such a shot the archer must be extremely skilled. A beginner cannot even be certain of hitting the target at all, least of all a specific point on the target. And during his training, the arrow would hit, randomly at first. Gradually, the archer improves his skill, learns to fine-tune his aim, drawing closer to the center of the target.

Despite the fact that we usually use a single word to mean accuracy, in fact, it consists of two parameters. One – how close to the center of the target we can hit (or, rather, to the point where at which we are aiming); The other – how well we can repeat the action and get the same result, or consistency.

Those who served in the military remember how their shooting results were evaluated. They probably shot a few rounds. Then they measured how close together the holes from the rounds were for each round. The shooter would, most probably, first learn to improve the consistency of hits. Only later would he learn to account for the parameters allowing correction to close the distance to the center. These include the weapon’s error, wind, a blinding light, his distance from the target…

This is why we need two words in order to evaluate accuracy. And two such words exist in the English terminology: Accuracy and Precision.

To demonstrate the two concepts, I have created a set of 4 targets and arrows which have hit them. Let’s compare the differences.

The archer who used this target already mastered consistency, but still hasn’t figured out how to hit the point he aims at: a high level of Precision, but not of Accuracy.

This target demonstrates results of a skilled archer who can both hit the point he aims at and repeat it consistently: that is, a high level of both Accuracy and Precision.

No Accuracy,
No Precision

This target was hit by a complete newbie, someone who lacks skill: a low level of both Accuracy and Precision. The hits are quite random.

The archer who shot at this target shows fairly good aim but is inconsistent, the dispersion is still quite high: a good level of Accuracy, but not of Precision.

Connection between variance and accuracy

We have grasped the division of the accuracy concept into the above two contributors, and focused on each of them separately. We can now go back and talk about the population variance. What population? Our products, for example. For, what is variance? Variance is the uncertainty, the level of dispersion between results. In other words, the degree of inaccuracy.

And while accuracy divides into two parameters, variance only correlates with Precision, and not Accuracy: the closeness between the results. On the other hand, Accuracy correlates with the shifts in the population average: closeness to the nominal value.

We are not limited to Precision in production. We may also look at Precision of measurement and even of those performing the measuring. For that purpose we need to introduce two terms in which the degree of Precision is determined. Reproducibility is the ability to reproduce the whole experiment in different conditions – another location, various operators, several tools, time-frame. Repeatability is the ability to repeat the same action again and again with a close result under the same conditions – same place, person, tool, time.

In order to estimate the skills of our operators, or accuracy of measurement equipment, we must use a statistical tool called Gauge R&R or R&R study. I shall not get into the mathematics of this tool, it’s pretty straightforward and found in many books on Quality Control. The idea is the following: we know that a good measuring system is critical in order for measurement results to allow us to correctly identify non-conformance and trends, correct them and improve processes. Gauge R&R determines the quality of our measurement system.

And, before we part, I would like to reiterate the importance of combining the two contributions of accuracy, and recall the story of another legendary archer, which, I am sure, needs no retelling: 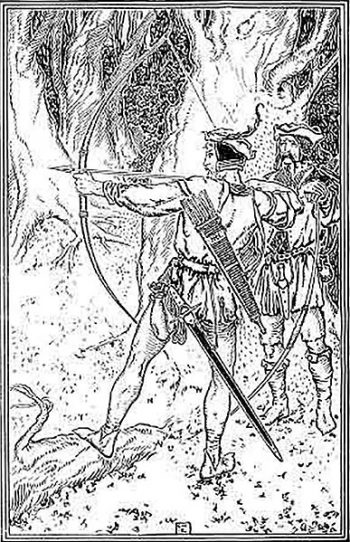 You are probably familiar with more than one version of that story. In some of them, a grand archery tournament takes place, in which both Robin Hood and the infamous Sheriff of Nottingham participate.

According to the story, the Sheriff of Nottingham was himself quite an accomplished archer, and has almost won the tournament, his arrows literally touching each other smack in the center of the target. But we know, naturally, that Robin Hood has beaten him, and he did that by means of… hitting his own previous arrow already in the center and splitting it in two.

Robin Hood has demonstrated an exceptionally high level of Accuracy, but not really higher than the Sheriff. What gave Robin the victory was his extraordinary degree of Precision: his arrow has hit not close, not touching, but through the center of the previous arrow itself. If that is not something every archer dreams of – I know not what is.

So let’s learn from Wilhelm Tell and Robin Hood, let’s study and improve our accuracy, our measuring skills and our measurement equipment.

Images, top to bottom: The opening image: illustration from the book Patriots and Tyrants by Marion Lansing, illustrated with old prints. Image from the Baldwin Project website.
Wilhelm Tell and his son do not bow before the hat on the pole. A mosaic of William Tell at the Swiss National Museum (Landesmuseum). Original image from Wikipedia.
The arrow split the apple in two halves. Illustration from the book by H.E.Marshall, Stories of William Tell told to children, made by I.L.Gloag. Original image from the The Baldwin Project website.
Robin Hood and Guy of Gisborne. Illustration from A Book of Old English Ballads, made by George Wharton Edwards, 1896.
Image from the Sacred Texts website.