I just love children’s stories and love citing them as illustrations in my work, of all kinds. There is so much one may learn from them, deep concepts and ideas hidden in children’s literature, one such is flying high.

And it is hardly surprising. Since the dawn of history of mankind we have been storytellers. This is how we teach and this is how we learn: by telling stories.

Some think that the purpose of reading a child a bedtime story is just spending an extra half-hour quality time with the child; others consider it being the means of teaching them to read books when they grow, copying adults, and that in order to make sure they follow this social rule that reading books is good. Not that I would argue with that, quite on the contrary: I love reading, it’s one of my favorite pastimes. But, and there is a “but” here, this is not at all the purpose of the exercise. The purpose is the lesson the story wishes to teach. It is a sort of schooling, if you like, ancient and efficient like nothing else. 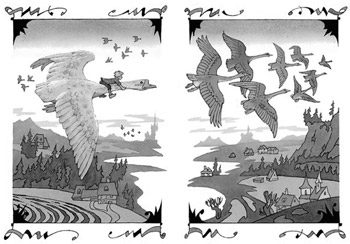 You have already been introduced to this approach of mine through the short paragraph from Alice’s Adventures in Wonderland by Lewis Carroll.

The story I would like to bring to your attention today is The Wonderful Adventures of Nils, by the Swedish author Selma Lagerlöf. Incidentally, the book was written specifically to the order of the Swedish elementary schools committee to help in teaching geography and history of the country.

For those unfamiliar with the story here is an extremely short introduction. We meet Nils Holgersson, a young and quite ordinary boy growing on a farm, who by a chain of certain incidents becomes the size of a small elf. A flock of wild grey geese fly over his farm on their way to Lapland for the summer, mocking the fat domestic geese who do not fly and do not migrate to the Southern warmer clime come winter. A young white domestic goose named Morten cannot overcome the temptation and decides to show them he is no worse than the wild geese. In a desperate attempt to stop him from flying away from the farm, the tiny Nils finds himself on Morten’s back high up in the air looking at fields and meadows far beneath them.

And here we are getting to the paragraph I want to call to your attention.

Morten has never flown farther than necessary to clear a fence to the other side. After a whole day of flying he is weary and in pain from exertion, and it’s all he can do to keep up with the wild geese, who continue in a steady pace like they didn’t fly the whole day. His wings feel heavy, and he starts falling behind and losing height, with the last bits of his strength.

The wild geese are aware of all which is happening in the flock, and they cry to their leader, Akka From Kebnekaise (name of the tallest mountain in Sweden), who rode in the center of the angle and led the procession:

Naturally, the white one has learned after a while that what Akka said was indeed true, and learned to keep up with the flock, or there would be no story, but…

Here is this surprising lesson Selma Lagerlöf chooses to teach the children – and the adults – in chapter 2 of her classically delightful book:

And indeed that may sound surprising and contradictory to all who have been, like me, accustomed to hearing the Russian proverb “the slower you go the farther you’ll get”. But that is not what the proverb truly means. The “slower” in question is aimed to check the recklessness of youth, to add a bit of consideration. It in fact instructs to choose your optimal speed where you have both the time for decisions and the speed of movement.

However, when we further consider the physical laws of nature, we find that Akka’s advice is entirely sound. Anyone remember their first bicycle rides? What happens when you are slow and unsure? Only one thing: you fall off. You cannot learn riding a bicycle too slow (until you learn perfect balance, but this a different story).

Flying is like that, as well. Trust me on this one, I have a degree in Aerospace engineering, after all. Flying fast and high is easier than flying low and slow. Pushing a heavy crate is easier when you do it fast than slow. Why? Because the force of inertia joins the force or you pushing the crate, helping you overcome the opposite (and lesser) force of friction (resistance), which is then becoming even smaller.

But what has it got to do with you?

Well, the basic laws of nature work not just in Newtonian physics. For those of you who aren’t sure what Newtonian physics is, it’s the physics you learn in school. It is a part of physics, one of the earliest and most basic ones, dealing with the motion of objects, the forces acting on them and their physical properties, in low velocities (compared to the speed of light) and on macroscopic scale.

In fact, basic laws of nature mostly do not consist of Newtonian physics. And they work just as well for the mind, and Quality Assurance.

There is inertia in everything we do as well as resistance (friction). For example: if you decide to regularly work out for your health, but you start your routine and set it up to be too slow (say, once a week), then by the time next week comes you have already been overpowered by the resistance and lost the inertia. You may as well be starting all over again. How many times will you start over? It is frustrating, creating negative emotions… very shortly the very thought of working out will have you depressed, and you will refrain from even thinking about it.

However, if you start with a healthy fast regime, make yourself do something every day, then the very fact that you did it provides inertia to carry you through to the next one, helping you overcome the resistance. It is easier to go fast than slow. Naturally, I do not mean exercising way beyond your ability, starting by attempting to walk from here to Lapland… but I do mean our psychological processes are governed by just the same laws which are applicable in Newtonian physics. These are just a specific narrow case.

OK, but what about it being easier to fly high than low?

Well, that is simple. From the physical laws of nature we all know that the further you are from the planet, the less gravity you get. That means, for all those who has not yet seen it themselves, that you need to get over less resistance, that you don’t need to exert quite as much effort to overcome gravity as you do down close to Earth.

Ever seen a space shuttle take off? Ever been interested how it manages to get to space? It flies in three stages: the first one is the take off and overcoming the dense atmosphere, which takes most of the fuel required.

According to NASA it takes 2 SRBs (Solid Rocket Boosters) with 500 tons each of solid rocket propellant per launch at the first stage (2 minutes), along with the three main engines. Naturally, it also lifts all the fuel at takeoff, so the shuttle with the SRBs weighs a total of about 2,041 tons. Then the empty SRBs disconnect and fall off, and the shuttle uses over 225 tons of liquid oxygen and hydrogen in the Large External Tank to propel itself into space. It still needs to overcome the Earth’s gravity to refrain from falling, but it is not nearly as strong as on the surface (and the shuttle is a lot lighter). Then, at 8.5 minutes after launch, the tank is disconnected.

Up in space, where there is virtually no gravity, the shuttle is left with its own three “small” main engines, with about 3 tons each of liquid propellant. They do not need to work constantly at all, only for short bursts, when necessary, to change the trajectory, slow or boost the shuttle.  So do you get the picture? The higher you get – the less effort, the less energy, the less resistance.

Whoever is careless with the truth in small matters cannot be trusted with important matters.

How does that translate to our work?

Well, flying high means setting high goals. Don’t settle for low goals, go for higher ones. They require more effort at the beginning, but they give you such a boost! In addition, up there, high, you’ll have a lot less competition. The lazy and the dozing, the fearful and the basking in their glory – they all stay low. When you reach high – you shall practically be up there on your own, and you shall be seen from afar, as well.

And when you fly high – everything is easier to maintain and improve, you have much less resistance. And… the view is spectacular!

So, fellow Quality Assurance engineers, managers and other personnel, my advice to you directly from the wisdom of the old grey goose Akka from Kebnekaise as brought to us by the Swedish author Selma Lagerlöf about 100 years ago is this:

Fly fast! Fly high! It is easier for you and the people you work with.