Tomorrow, Friday, it is going to be Tu BeAv, the 15th of the month of Av. The Ancient Festival of Love and Passion. And here I am, as usual, thinking and pondering on the subject of this holiday, reading interpretations… I would like to share with you what I feel coming up from them.

Today most of the Israeli Jews habitually refer to the Orthodox Jews, the Haredim, as the ultimate authority on Judaism. The “true” Jewish way.

However, the Biblical tradition stands in complete and stark contrast to what the Orthodox Jews preach. They who cover their women from head to toe, stopping short only before hiding them under a Muslim burka, all in the name of modesty. They who disallow women from everywhere they can, to spare themselves even the slightest chance of exposure to some temptation, God forbid. They who eliminate every trace of existence of women even from illustrations to Passover Haggadah. Like the one I perused this year very carefully and found not a single female figure in any of the many pictures… In complete and stark contrast to them, the bible talks of love and passion quite freely, as a routine occurrence. 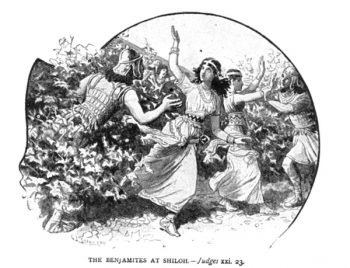 Passion and sexuality in the Bible

The Bible doesn’t attempt to downplay sexuality, to silence occurrences of passion and lovemaking. In fact, it doesn’t get worked up about it at all. It doesn’t hide love relations between husbands and their wives. Between men and women who are not married, or not to each other. It speaks freely and without any unnecessary emotions of instances of love between people, who are not supposed to love each other.

The writers of the Bible knew perfectly well that love and passion are but natural part of life. A wonderful and mysterious part of life. A great force, which sometimes crosses our limits. And this means, that when we celebrate Tu BeAv today, for me it symbolizes the balance between body and soul, and the perfection of creation. For we were not created purely rational or spiritual beings. We were given bodies, which are capable to take pleasure in passion and lovemaking.

Kidnapping of maidens at Shiloh

The story of the kidnapping of young women at Shiloh by the men of Binyamin tribe is one of these stories. It is also the one specifically connected to Tu BeAv. Personally, I love this story. It demonstrates the sophistication of the people and their flexibility, while finding a creative solution to a problem they created out of anger.

The ban on the men of the Binyamin tribe to marry the daughters of other tribes was an impulsive decision taken in anger. There was no thought of its long-term implications, no consideration of the consequences. Perfectly understandable, for when we make a decision in anger, we are incapable of rational thinking.

But when they calmed down and cooled off, they were once again able to rationally consider the new state of matters. It has become clear, that a vow was given in error, which should never have happened – but there it was.

So what did they do? They could sit and talk as victims would. Blame everything and everyone. Point the finger at the men of Binyamin tribe for the situation. That is not what they did. Instead,  they took responsibility and thought. They asked the question: What now? How to proceed?

And the solution was found. Allow young girls who expressed willingness to go and dance in the vineyards. Aware that the men of the Binyamin tribe would know it and come and carry them off. Thus the vow will not be broken, and everyone would be able to marry. The continuance of the people would be assured.

So, on this Tu BeAv, I would like you to focus on two things:

One – lets call things by their proper names. Let’s not pretend that something does not exist which does. Not be afraid of making mistakes here and there. Deal with the challenges in our lives by embracing life with its laws of nature, and our ability to make a choice,

Let’s forget about looking for someone to blame. Instead. invest all our energy, in searching for win-win solutions.

Below is a special greeting card I designed for you. Click on the picture to enlarge. 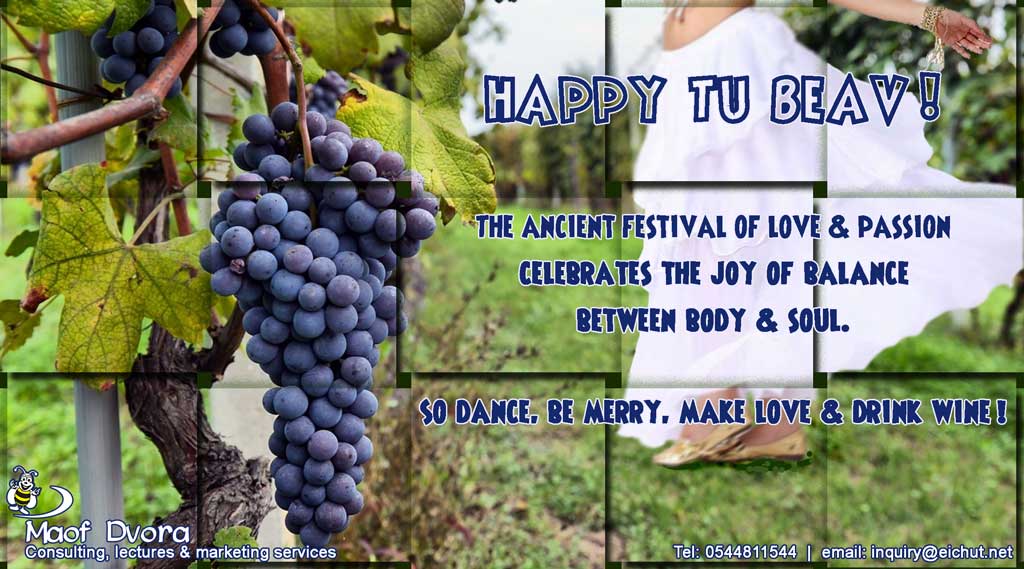