Aristotle was a philosopher and scientist who lived in Ancient Greece in the 4th century BC, the Classical period. His writing encompasses many various fields: physics and metaphysics; biology, and zoology; aesthetics and logic;  music and theatre; linguistics and poetry; politics and economics; ethics and psychology…

Along with Plato, he is considered the “Father of Western Philosophy”. The Western culture has inherited his approach, including problems and methods of inquiry, which has influenced almost every form of knowledge.

In his youth, he joined Plato’s Academy in Athens and remained there until the age of 37. Shortly after Plato died, Aristotle was invited by Philip II of Macedon to tutor his son, who was to become Alexander the Great. 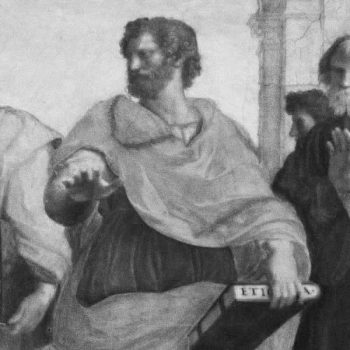 Though he was educated in the Platonic theory of the abstract world invisible to us, Aristotle has in tome developed a different approach of a more physical and realistic manner. He found himself interested in the natural sciences, and focused on the physical tangible world around us rather than the metaphysical abstract one. 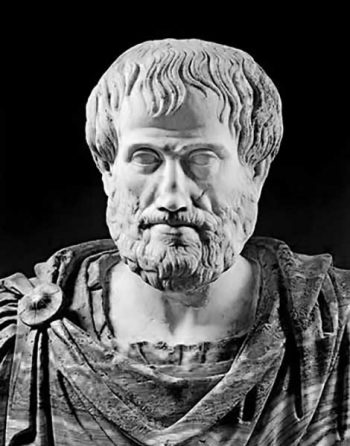 His work and writings had a profound influence on science and philosophy of the middle ages, both within Christendom and Islam. The Muslims respected him and gave him the honorific title “The First Teacher”, Many early scientific theories were based on his research. To this day Aristotle’s philosophy continues to be the focus of much academic study and research.

He has conducted trips around the islands of Greece and to Asia Minor.

I shall not even try to encompass Aristotle’s life and work in this short summary. I shall note, though, that like many other amazing people who left so much behind them, Aristotle was special in that he was curious about so many things. The very dealing with so many different and seemingly unconnected areas allowed him to create a clearer picture of how this world worked. It is the reason to his wisdom and his many discoveries.

Excellence is an art won by training and habituation. We do not act rightly because we have virtue or excellence, but we rather have those because we have acted rightly. We are what we repeatedly do. Excellence, then, is not an act but a habit.

You will never do anything in this world without courage. It is the greatest quality of the mind next to honor.

Dignity does not consist in possessing honors, but in deserving them.

Fear is pain arising from the anticipation of evil.

Character may almost be called the most effective means of persuasion.

Even when laws have been written down, they ought not always to remain unaltered.

It is during our darkest moments that we must focus to see the light.

The roots of education are bitter, but the fruit is sweet.

Pleasure in the job puts perfection in the work.

It is the mark of an educated mind to be able to entertain a thought without accepting it.

There is no great genius without some touch of madness.

Anybody can become angry – that is easy, but to be angry with the right person and to the right degree and at the right time and for the right purpose, and in the right way – that is not within everybody’s power and is not easy.

My best friend is the man who in wishing me well wishes it for my sake.

Happiness depends upon ourselves.

The one exclusive sign of thorough knowledge is the power of teaching.

The ideal man bears the accidents of life with dignity and grace, making the best of circumstances.

In all things of nature there is something of the marvelous.

The aim of art is to represent not the outward appearance of things, but their inward significance.

Those that know, do. Those that understand, teach.

Friendship is essentially a partnership.

Dignity does not consist in possessing honors, but in deserving them.

To run away from trouble is a form of cowardice and, while it is true that the suicide braves death, he does it not for some noble object, but to escape some ill.

Persuasion is achieved by the speaker’s personal character, when the speech is so spoken as to make us think him credible. We believe good men more fully and more readily than others: this is true generally whatever the question is, and absolutely true, where exact certainty is impossible and opinions are divided.

The secret to humor is surprise.

Nature does nothing in vain.

Courage is the first of human qualities because it is the, which guarantees the others.

The whole is more than the sum of its parts.

The greatest virtues are those, which are most useful to other persons.

Change in all things is sweet.

I count him braver who overcomes his desires than him who conquers his enemies; for the hardest victory is over self.

Fear is pain arising from the anticipation of evil.

The least initial deviation from the truth is multiplied later a thousand fold.

Moral virtues are produced in us neither by nature nor against nature. Nature, indeed, prepares in us the ground for their reception, but their complete formation is the product of habit.

I have gained this from philosophy: that I do without being commanded what others do only from fear of the law.

It is not once nor twice but times without number that the same ideas make their appearance in the world.

No one loves the man whom he fears.