Albert Einstein was a German-born theoretical physicist, Nobel Prize laureate (especially for his discovery of the law of the photoelectric effect, key for developing quantum physics), who is mostly famous for his theory of relativity. Everyone is familiar with his formula, connecting mass and energy: E = mc2. Tis among the many discoveries he made, which have contributed greatly to the progress of science.

In addition, he has also become known as the philosopher of science.

Albert Einstein grew up in a non-observant Ashkenazi family, and even went to Catholic school as a young child. Still, is is evident from his many writings and sayings that he was raised in the spirit of Jewish philosophy. 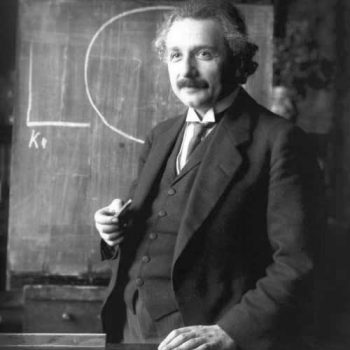 He didn’t begin to talk until he was 4 years old, and wasn’t considered a very good pupil, in spite of being extremely gifted in physics and mathematics and even has taught himself algebra and Euclidean geometry over a single summer at the tender age of 12. A family tutor couldn’t keep up with the child’s genius and rate of study, who has understood at a very young age that the world may be comprehended and explained in mathematical terms. At 13 he has discovered Critique of Pure Reason by Immanuel Kant, which is incomprehensible to ordinary mortals, yet seemed to be clear to him. He resented the school’s methods, saying later that the spirit of learning and creative thought was lost in strict rote learning. 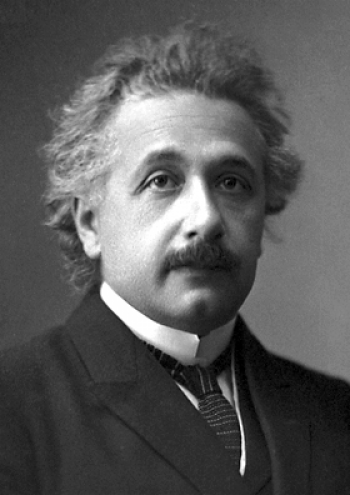 His life was far from being a rose garden. There was unrequited love and an unhappy marriage; there was ambition and the need to provide for a family; there was a frustrating search for recognition of his genius and a nondescript tedious job at the patent office; there was a second marriage and immigration; love and the loss of his wife; even the loss and grave illnesses of his children. But through it all, this man was passionately interested in everything and anything, thought things through deeply, relentlessly searched for answers and hasn’t given in to the rigid norms of the surrounding society. He loved life with a passion, and his thirst for knowledge was constant and all-encompassing. All this is clearly evident from the things he said, and he is my favorite source of quotations.

Education is what remains after one has forgotten what one has learned in school.

The true sign of intelligence is not knowledge but imagination.

Life is like riding a bicycle. To keep your balance, you must keep moving.

I have no special talent. I am only passionately curious.

Science without religion is lame, religion without science is blind.

A person who never made a mistake never tried anything new.

It’s not that I’m so smart, it’s just that I stay with problems longer.

Once we accept our limits, we go beyond them.

If you can’t explain it simply, you don’t understand it well enough.

Common sense is the collection of prejudices acquired by age eighteen.

The environment is everything that isn’t me.

The most beautiful thing we can experience is the mysterious. It is the source of all true art and science.

Intellectual growth should commence at birth and cease only at death.

We cannot solve our problems with the same thinking we used when we created them.

Whoever is careless with the truth in small matters cannot be trusted with important matters.

Only two things are infinite, the universe and human stupidity, and I’m not sure about the former.

Logic will get you from A to B. Imagination will take you everywhere.

All religions, arts and sciences are branches of the same tree.

Any man who can drive safely while kissing a pretty girl is simply not giving the kiss the attention it deserves.

If you are out to describe the truth, leave elegance to the tailor.

A table, a chair, a bowl of fruit and a violin; what else does a man need to be happy?

The high destiny of the individual is to serve rather than to rule.

A man should look for what is, and not for what he thinks should be.

It is a miracle that curiosity survives formal education.

To raise new questions, new possibilities, to regard old problems from a new angle, requires creative imagination and marks real advance in science.

As far as I’m concerned, I prefer silent vice to ostentatious virtue.

Confusion of goals and perfection of means seems, in my opinion, to characterize our age.

If people are good only because they fear punishment, and hope for reward, then we are a sorry lot indeed.

Love is a better teacher than duty.

In order to be an immaculate member of a flock of sheep, one must above all be a sheep oneself.

The value of a man should be seen in what he gives and not in what he is able to receive.

An empty stomach is not a good political adviser.

Anger dwells only in the bosom of fools.

The only reason for time is so that everything doesn’t happen at once.

All that is valuable in human society depends upon the opportunity for development accorded the individual.

In matters of truth and justice, there is no difference between large and small problems, for issues concerning the treatment of people are all the same.

I think and think for months and years. Ninety-nine times, the conclusion is false. The hundredth time I am right.

The road to perdition has ever been accompanied by lip service to an ideal.

We still do not know one thousandth of one percent of what nature has revealed to us.

Never do anything against conscience even if the state demands it.

Few people are capable of expressing with equanimity opinions, which differ from the prejudices of their social environment. Most people are even incapable of forming such opinions.

Morality is of the highest importance – but for us, not for God.

Reality is merely an illusion, albeit a very persistent one.

We should take care not to make the intellect our god; it has, of course, powerful muscles, but no personality.

Nothing is more destructive of respect for the government and the law of the land than passing laws which cannot be enforced.