Dalai Lama is a title, the title of the spiritual leader of Tibetan Buddhism. The current Dalai Lama  is 14th in number, and the man’s name is Tenzin Gyatso.

The title comes from the Mongolian language.

The word dalai means “sea” or “ocean”, and the word lama means “wisdom”. Thus the Dalai Lama is a sea of wisdom.

It was first given to the Lama of Lhasa, capital of Tibet, in the late 16th century. It was when Buddhism has spread to Mongolia. Altan Khan, leader of the Tümed Mongols gave him the name Dalai Lama.

According to Tibetan tradition, the Dalai Lama is considered to be the reincarnation of  bodhisattva Avalokiteśvara. His figure in Buddhist mythology symbolizes the compassion of all the Buddhas, and he is considered the patron of Tibet. When he dies, his soul enters the body of an infant. A child with promise is given traditional religious tests, and if he passes, he becomes the new Dalai Lama. 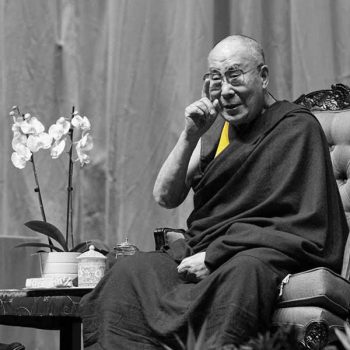 Before his death, the 13th Dalai Lama has revealed that his successor and reincarnation shall be born in Amco, in the northern region of Tibet. A search team from the Gelug or “Yellow Hat” school of Tibetan Buddhism was sent to find him. They arrived to the region where Tenzin Gyatso lived with his family in the small hamlet of Taktser. He was called then Lhamo Dhondup, he was  the 5th out of 16 siblings  and one of 7 to survive childhood. At the time he was only 2 years old.

One of the leading members of the search party had a vision. In it was a large monastery with a gilded roof and turquoise tiles, and a twisting path to a hill to the east. Opposite it stood a small house, in which the successor of the Dalai Lama lived. When they came to the valley, the house was the one Dhondup lived in.

The traditional tests established that Dhondup is the reincarnation of the 13th Dalai Lama.

The region was ruled by a Muslim warlord Ma Bufang of Qinghai, its Chinese governor. In order to bring the child to Lhasa, Ma Bufang’s permission was required. He demanded proof that the child was the Dalai Lama. To avoid his invading Lhasa, he was told the tests were to be made there. In order to receive permission, Tibet had to pay a huge ransom of 300,000 silver dollars.

In October 1939, he has finally reached Lhasa with his family, travelling with a caravan of Muslim traders. He needed to receive Buddhist education, which would prepare him for his future role. He was taken to a  monastery, where he stayed until age 25, studying Buddhism an living the life of a monk. At the end of his studies he was awarded the Lharampa degree. It is the highest-level academic degree for Buddhist monks and nuns, roughly equivalent to a doctorate in Buddhist philosophy. 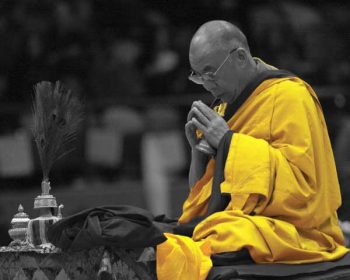 He has taken on the role of the Dalai Lama at the age of 15. His name was changed to: “Jetsun Jamphel Ngawang Lobsang Yeshe Tenzin Gyatso Dalai Lama”. It means: Holy Lord, Gentle Glory, Compassionate, Defender of the Faith, Ocean of Wisdom. The Western title for him is usually His Holiness.

Ever since Tenzin Gyatso holds his position, he serves as Tibet’s spiritual leader. Until 2011 he was also head of Tibet’s political struggle for independence. He served as head of Tibet’s central government in exile. In March 2011 he has retired from political responsibilities. He did not wish to see China enter into a new conflict with Tibet about a successor, after his death.

Since 1959, China has taken Tibet in response to his assuming his tradition duties as head of government. As a result, the 14th Dalai Lama was forced into exile. He lives in the north of India, where he has established his central government in exile. All this time he worked to preserve Tibetan culture and education within tens of thousands of exiled Tibetans, accompanying him.

He and his followers live in a town called McLeod Ganj, in the mountain range above Dharamshala. It is often referred to as “Little Lhasa”, due to the large number of exiled Tibetans.

Tenzin Gyatso has adopted the idea of Satyaagraha. It is a philosophical concept and a particular form of nonviolent resistance or civil resistance, coined and developed by Mahatma Gandhi. Like Gandhi, he opposes any violent action against the Chinese occupation of Tibet. He chooses, instead, protest through diplomacy, public relations and spread of ideas by speaking the truth.

Tenzin Gyatso is considered a warm and charismatic person, an excellent speaker (he is fluent in English) and a respected public figure. He is the first Dalai Lama to have visited the West, including Israel. In the political arena, he was active not only to free Tibet, but also for attaining peace in various conflicts in the world. In 1989 Gyatso was awarded the Nobel Peace Prize for the nonviolent struggle to free his country.

As a result, the 14th Dalai Lama has become a symbol of Tibet’s liberation movement. The Chinese government has declared him “separatist” and refuses to negotiate with him. The ban is so total, that possession of images, photos or writings of the Dalai Lama was declared a severe crime. The punishment is imprisonment, torture or even the heaviest of all: death.

The goal is not to be better than the other man, but your previous self.

Happiness is not something ready made. It comes from your own actions.

My desire to devolve authority has nothing to do with a wish to shirk responsibility.

Home is where you feel at home and are treated well.

Give the ones you love wings to fly, roots to come back, and reasons to stay.

It is very rare or almost impossible that an event can be negative from all points of view.

Be kind whenever possible. It is always possible.

Love and compassion are necessities, not luxuries. Without them humanity cannot survive.

In order to carry a positive action we must develop here a positive vision.

The world doesn’t belong to leaders. The world belongs to all humanity.

Remember that sometimes not getting what you want is a wonderful stroke of luck.

The more you are motivated by love, the more fearless and free your action will be.

Just one small positive thought in the morning can change your whole day.

To conquer oneself is a greater victory than to conquer thousands in a battle.

If you think you are too small to make a difference, try sleeping with a mosquito.

Choose to be optimistic, it feels better.

Our prime purpose in this life is to help others. And if you can’t help them, at least don’t hurt them.

When you practice gratefulness, there is a sense of respect for others.

A lack of transparency results in distrust and a deep sense of insecurity.

The roots of all goodness lie in the soil of appreciation for goodness.

Because of lack of moral principle, human life becomes worthless. Moral principle, truthfulness, is a key factor. If we lose that, then there is no future.

We can never obtain peace in the outer world until we make peace with ourselves.

The main destroyer of a peaceful mind is anger.

Harmony is very much based on trust. As soon as one uses force, it creates fear. Fear and trust cannot go together.